Most of what little refinement I have can be attributed to my lovely and loving wife.

I would say all of it could be attributed to her, but I do have a pretty good three-object juggling technique that I’ve worked hard on over the years to perfect.

But other than my juggling skills, just about anything else refined about me — especially anything artistic or intellectual — more than likely has its foundation somewhere within in my wife’s lovely and loving intellectual and artistic brain.

For instance, my love and appreciation of George Winston’s music is wholly responsible to my wife.

But after I met my wife and we started dating, she immediately introduced me to something strange and different. Something called Classical Music.

She introduced me to all the masters, of course…Mozart, Bach, Beethoven, Mendelssohn, and, my favorite, Vivaldi, among others…

And she also introduced me to some contemporary Classical Cat named George Winston.

Yeah, that cat was not just classically Big in Japan (like that slick Tom Waits reference?), he was huge in Japan. Immense.

And I listened to Autumn and the rest, as they love to say, is musical history.

And I have been a huge, immense, fan of his ever since.

I remember when mp3 players first came out. This was at the turn of the century; several years before the iPod.

I bought one for my daughter and my eldest son.

So I assumed control, first over my son’s (my daughter was older so her giving up on her mp3 player would come several weeks after my son’s giving up). And I loaded all our George Winston CDs onto it. And then I pressed “Play” and it never stopped playing his music for the next, oh I don’t know, three months or so.

We just kept George Winston’s music on. Day and night.

And after the son’s player died from exhaustion, I loaded up the daughter’s and George’s music continued to play, day and night, until it, too, eventually bought the technological farm, so to speak, from overuse.

My sister and her family came to stay with us for a few months during this period of George Winston as the soundtrack of our daily living. She mentioned not too long ago that one of the things she remembers most from that time was the beauty of George’s music constantly playing. Day and night.

Grand memories they are when they come with a soundtrack.

A few years ago, George came through York, PA, and played its Strand Capital Performing Arts Center. The wife and I went to see him perform for the first time as part of a wedding anniversary treat.

And what a treat it was. But we didn’t stick around after the performance to try to meet him. To be honest, I didn’t think anyone of his stature (An example of his stature is illustrated by the fact that he has close to 2 million followers on Soundcloud. Soundcloud! My guess is many of you haven’t even heard of Soundcloud, yet he still has such a following there.) would bother coming out afterwards to meet his fans.

Boy* was I wrong…

My wife, as artistically and intellectually talented as she is, writes and photographs for a Japanese travel website. And when she discovered that George Winston was once again making his way through our neck of the woods, she boldly (she is completely fearless) sent out interview requests to him.

And he responded positively and kindly said to make all interview arrangements with a member of his team.

And just like that my wife and, by extension, I were going to be able to meet this long-time musical hero of ours.

The show was magical, of course. Sublime…

As we were waiting for it to begin, I couldn’t help but overhear all the conversations going on around me. It was interesting, and rather amazing, that they all were basically saying the same thing: How they have been long-time fans of George’s and how important his music has been to their lives.

George is one of those wonderful people.

And he would be such a person just by his musical contributions alone.

But, I’ve come to find out, that he is such a wonderful person even had he not been the genius of a musician that he is.

After the show, the wife and I, somewhat nervously, went down to the stage to wait for this wonderful musician.

And so did a gaggle of other dedicated fans.

As I waited for him to come out, I wondered how we all, this gaggle of fanboys and girls, would be received.

To be honest, I was a little worried.

This man and his music have been such a solid, foundational element of my life for so long — over thirty years — and that of the life of the woman I love the most, that I was worried that we were going to be disappointed in him as a person.

How many times have I heard that old saw of a saying, Never meet your heroes.

I, the skeptic’s skeptic, can be very skeptical of the human species, to say the least.

Mostly I believe heroes are for kids.

I didn’t really believe that George Winston could live up to all that my wife and I had built him up to be.

And I was worried that my most lovely and loving wife would be let down, hurt even, because of it.

But then George came walking out as if he hadn’t just played his heart out for the last two hours.

As if he hadn’t been performing for the last thirty years or so.

As if he were really looking forward to meeting with those who were so anxiously waiting to meet him.

George came out with a bounce in his step and the most welcoming of smiles.

And he headed head first into the waiting gaggle and he shook hands and he hugged and he signed autographs and he took pictures as if he truly enjoyed doing it.

And he did enjoy it.

It was so easy to tell…

By the twinkle in his eye and the ever-present smile on his face, it was so completely obvious that he did really enjoy meeting with us who were so looking forward to meeting with him.

And then he turned to my wife.

And I thought, okay, how is he going to respond to someone who has come not just to worship, which we of course did, but to also question him and photograph him for a purpose beyond just pure fandom.

He didn’t even think twice about it.

His eye lost not a glimmer of its twinkle, nor did his smile lessen the least bit in its broadness.

He, much to my wife’s amazement and joy (and of course mine..but especially the wife’s), treated her to, quite literally, the time of her life. 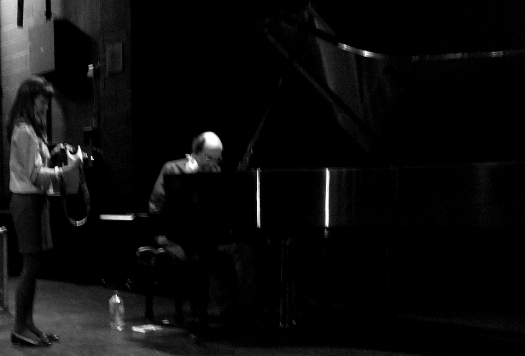 I could go on and on in very vivid detail how impressive George Winston is. I could because I saw it first-hand, up close and personal for very near an hour. I watched in awe as he reminisced and laughed and joked – oh lordy is he a funny guy – and impressed us with his knowledge of Japan (he has been to the country twenty-six times and has visited over sixty cities) and its language and his humorous outlook on some of the funny quirks and peculiarities of the Japanese way of life; and I watched especially awed as he performed in his own unique and beautiful way traditional Japanese songs just for my wife…

While she sang to him!

I could go on and on…it was just that special.

It was just that magical.

But I guess it would be better for me to just stop here so I can begin reflecting upon that most magical of evenings.

Yes, I truly am the lucky guy, for I now have the memory of a lifetime, a magical memory, one starring a true hero, and one with the most beautiful of soundtrack from which I will be able to draw upon and play over and over again in my theater of a mind for the rest of my long and lucky life. 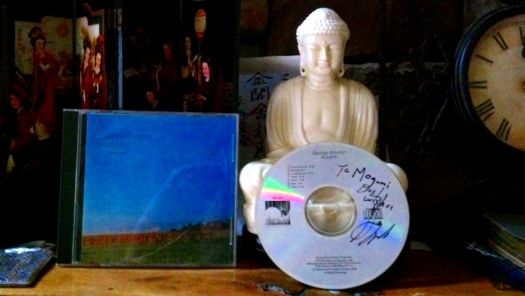 A selection and sample of George Winston’s work

25 Replies to “You know, sometimes it’s okay to meet your hero…”